I had so much fun getting vampy for Halloween this year that I wanted to share the details on my hair, makeup, costume, and accessories on the blog for you all.

I started off my costume hunt at the LA area beauty mecca Naimie’s Beauty Center. If you don’t know, Naimie’s is a two-story warehouse filled with wigs, drugstore and high end makeup (MAC, Makeup Forever, Lime Crime, Ben Nye, Red Cherry Lashes), hair products, special FX makeup, and more. It is an awesome place for beauty lovers. I bought the Ben Nye Vampire Kit for $18 that looks like this:

One of the guys there recommended I check out Halloween Town in Burbank because they had a surprisingly small selection of fangs at Naimie’s. The products I ended up using from this kit on the night of Halloween were the Vampire Character Base (which I was worried might be the color of my actual skin, but luckily it was lighter) and the mint flavored fake blood. I did use the other cream colors when practicing for my look a few nights beforehand, but didn’t end up using them in the end because they were harder to blend than the powder products I ended up using. If I was doing it over again I think I would just buy the blood and possibly the base. Here’s the video that inspired my practice run:

For the makeup I ended up doing, I used Shaanxo’s video as inspiration: 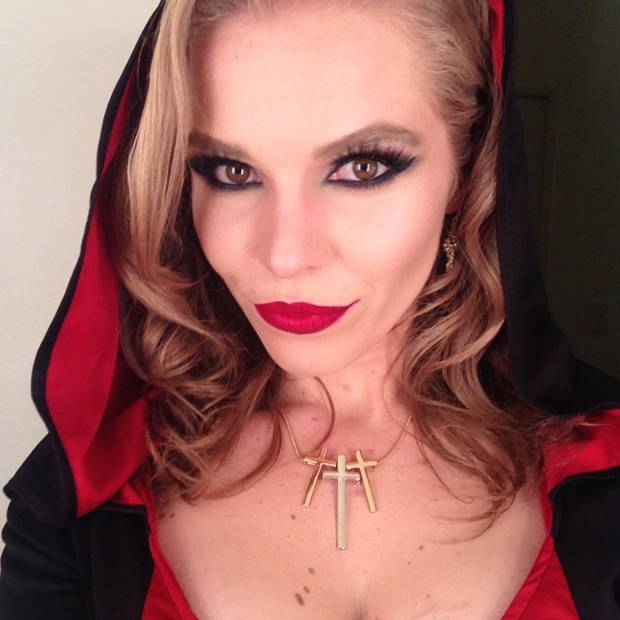 I first applied my Makeup Forever HD foundation because it is the lightest I owned, and then I applied some of the Ben Nye Vampire base over it (with my beauty blender) for fuller coverage and to make me appear lighter. I also blended the Vampire base all over my neck and chest to make them appear lighter as well. For my concealer under my eyes and to highlight I used Hard Candy Glamoflauge in the lightest shade. This video convinced me that I definitely NEED the Lorac Pro Palette 2. I used a giant BH Cosmetics palette for the white eyeshadow to highlight and MAC Carbon for the black eyeshadow. For the liquid liner I used theBalm’s Schwing that I mentioned in my October Favorites. The lashes are House of Lashes in Iconic. The brows are Anastasia Beverly Hills Dipbrow in Taupe. The contour color was actually an old eyebrow powder in a perfect grey/brown/taupe shade. To highlight I used a ton of NARS Devottee all over my face and chest. For my lips I used LA Girl Cosmetics lip liner in “Wine” and Stila Liquid Lipstick in “Beso”. The dark lip liner gave me a slight ombre effect.

For my hair I got a blowout at a new super cute salon called Nail Bar & Beauty Lounge in Beverly Hills by a great stylist named Natalie. I also got a manicure and pedicure at the same salon in one of my favorite fall colors- Essie Wicked which is an awesome dark blood red shade. For my hair I showed her this picture of Rita Ora to show what I wanted:

She recommended I pin my curls again over night (I had my hair done the night before) and this really helped. I worked all day on Halloween so when I went to touch up my hair I sprayed a bunch of Batiste Dry Shampoo in it to give it volume and make it a little lighter and then I pinned it again while I was doing my makeup. After that I used a 1.5in curling iron to make curls going towards my face and used some hairspray to hold everything in place and shape the front how I wanted it.

My favorite accessory I didn’t even know existed until a guy at Naimie’s told me about it and it was retractable fangs! How cool is that!? I knew I HAD to have them to complete my costume. After being told at Halloween Town and Cinema Secrets that they didn’t exist I went to a more reputable outlet- the internet and found Vampfangs.com You would be surprised how much most of the regular old stick-em-to-your teeth fangs cost – most are around $20+ and these retractable ones were less than $18 including expedited shipping that got them to me just in time for Halloween. The fangs are $9.95 on the Vamp Fangs website and they are so cool! They custom fit to your teeth with some dental putty and then there’s a bar on the top of your mouth that you move with your tongue to make the fangs go up and down. Now while I loved what a cool effect these were and really felt like they elevated my costume to the next level, they were not perfect. The main issue I had with them is that I have big gums and they rubbed against them all night and I couldn’t keep them in for more than a minute to show some people and take pictures and then I would take them out again. My mouth is actually still sore from wearing them. I also couldn’t really talk with them in. I would recommend them because they are so awesome, but just know that it’s not something you’re going to be able to wear all night with no issues.

My cross necklace and earrings were both from Forever 21 and were only 69 cents each on clearance! Another great find.

My costume was just a generic bagged one that I bought at Halloweentown in Burbank. Halloweentown is actually 3 stores (adults costumes, kids costumes, and decor) and it is definitely a must-see for Halloween super fans. The costume was called “Sexy Hooded Robe” and it was $39.99 and I did see it a few dollars cheaper at Cinema Secrets so next time I would go there first. For shoes I wore some black peep-toe platforms from Forever 21.

A few of the beauty gurus on YouTube keep bringing up the Victoria Secret Bombshell Add-2-Cups Push-Up Bra and I thought Halloween was a great excuse to finally buy one for $49.50. To maximize the effect I made the straps pretty tight, I put a folded up knee-length sock in the bottom/outer part (near the armpit) and did the bend over and lift them up method. I then contoured my cleavage by brushing the same contour powder I used on my cheeks between my boobs and on the tops in a half-circle shape (so basically if you were looking at me it looks like when you draw one of those simple bats). I then applied a lot of highlighter to the tops of them and all over my chest.

This is what I look like in the costume in an everyday push-up bra vs. with the Bombshell bra, socks, and contouring:

This site uses Akismet to reduce spam. Learn how your comment data is processed.

Welcome to Blushing in Hollywood!

My name is Lindsay and I write about Real Life and Real Housewives. If you need a break from the stress of life in the form of a beauty tip or trick, or want some big sis advice about glowing up and becoming your best future self- this is the place for you!

We use cookies to ensure that we give you the best experience on our website. If you continue to use this site we will assume that you are happy with it.Ok